Why She Doesn’t Kiss You 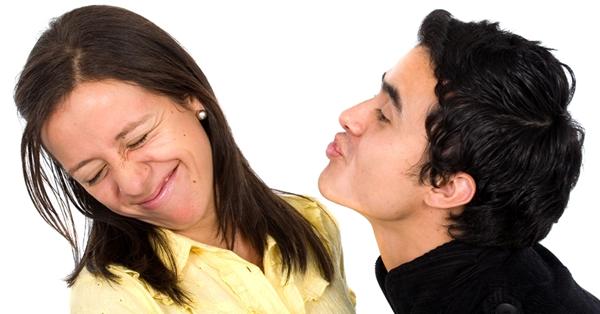 Why She Doesn’t Kiss You?

The first kiss opens up space and time to pursue things further with a person. Getting the first kiss can often times be easier said than done, but always worth the effort in the end. The trick is to exude confidence and ensure that your date remains comfortable in the situation. This makes it easier for her to open up to you and share a meaningful kiss at the end of the night. But what does it mean when she doesn’t let you reach that moment? What is she thinking when she doesn’t kiss you?

Playing hard to get

The oldest trick in the book is to play hard to get. We don’t endlessly crave the thing that is easiest to acquire. In video games, we feel most powerful when we defeat the bosses. Killing an enemy in three blows just doesn’t deliver the same feeling. When given a difficult task, we want to overcome it. It’s in our nature. No matter how long and arduous the task may be. With dating, the game is no different. Girls like to play hard to get because it’s fun to represent a challenge. We want to see how hard we can make you work for it. But the end result is a reward for the effort put forth. It’s not that women want to see you squirm, rather the opposite. They want to make sure that you won’t just quit after the first couple attempts and that you are serious about pursuing her other than just a hook up. If she doesn’t kiss you, that does not necessarily mean that she does not like you, in fact that may mean quite the opposite.

A bit similar to playing hard to get but from a different dynamic. The scenario is that the date is going swimmingly. She laughs at your jokes, understands your sense of humor, and is smiling thoughtfully while you talk. You can tell she’s into you, so why doesn’t she kiss you? Perhaps she really is into you. But not everyone likes to jump into the water right away. Some like to feel the temperature, and ease into it one toe at a time. Don’t rush things! Relax. She wants to wait until a special moment that she’ll want to remember. That isn’t going to happen if the scenery doesn’t change or if you only ever want to hang out with her at loud, chaotic places. If you start to feel impatient with your date, that’s on you. But women who prefer to take it slow are not exactly uncommon. Girls like to know what they’re getting into. Even if she doesn’t kiss you, sit back and let her drive. Be aware of her body language for cues that tell you when she is ready. The #Metoo Movement has brought a lot of light to sexual escalation happening without full consent. If you are ever unsure of how your date feels, than you should ask. If you want to kiss her, but do not want to make her feel uncomfortable than ask her how she is feeling.   Women will respect a man a lot more who shows that he cares about her desires!

No dating until you’re eighteen! Remember the fingertip rule. Leave space for Jesus. Be back by nine. Does any of this sound familiar? Chances are that you aren’t familiar with what it’s like being a daughter of conservative parents. It might sound like a sweet and innocent upbringing, but can also be frustrating. However, the result of such a household can be reluctance to dive straight for the first kiss on the first date. If she doesn’t kiss you, there’s a chance that she has a conservative mindset. She was raised to mind her manners and avoid showing too much skin. Let this woman come to you. Encourage her, and remind her that she doesn’t always have to live by her parents’ rules. Most important of all: Never shame her for her beliefs.

Additionally, there could be a chance that she’s not into you at all. Which is totally fine! Ask your dating coach for some more tips for a new date. There are plenty of fish in the sea, and it’s not always worth it to get hung up on just one. There are a few ways to tell if she won’t kiss you because she’s not into you.

If you heard this line at any time during the night, then it’s game over. She has clearly placed you in what she would call the “friend zone”. Maybe before the date she had other things in mind, but upon meeting you she decided otherwise. You may never know why. It’s just part of the mystery. If she doesn’t kiss you, perhaps it’s because she would rather have you as a friend than a lover.

You forgot to brush your teeth

Halitosis, anyone? Bad breath is a turnoff for any newcomer. If she doesn’t kiss you, perhaps you should suck on a breath mint. It won’t solve the problem of poor hygiene, but at least it might mask it.  I encounter to many men with bad breath,  if you plan on speaking closely with a woman then chew gum, have a mint, or listerine. Everyone thinks their breath smells fine, but I guarantee that many of you are probably wrong. Do not let bad breathe be what stops you from getting that kiss. I have seen to many of my girlfriends reject guys only because their breath stunk. Don’t be that guy! You have a toothbrush, right? Use it!

So with this one, you two did kiss. Unfortunately, she did not seem to enjoy it at all. Afterwards, she might have grimaced, looked elsewhere, or otherwise acted awkward. Sometimes, there is no telling why she behaved this way. It could have been because of her. It could have been because of you. Maybe she’ll shake it off and you’ll still have a wonderful night. But sometimes it doesn’t go that way at all, which leads into the next point.

Again, perhaps you make it to the kiss. But what goes down afterwards is less than savory. Whether or not she acted awkward afterwards, she still made an excuse to leave. Her friend’s car broke down. Her mom called her. Her brother’s roommate’s step-dad’s baby has a cold and only she knows to fix it. Maybe she didn’t even offer an excuse, and just said she had to go. It’s difficult to say why she felt the way she did, but obviously she didn’t want to stick around. She could be back, but there’s also a chance that she wasn’t ready for this and needs time.

You could have the greatest conversation skills in the world and you will still manage to find someone who doesn’t seem interested in anything you have to say. Maybe you even ended up on a date with that person. You can’t control whether or not someone enjoys your conversation. You can’t make them respond in-depth to your insightful questions. You can’t force them to laugh at your witty stories. Sometimes, they just don’t get it. They don’t get you. And that’s nothing that you did wrong. You will meet people in your life with whom it’s difficult to get along. The best thing to do in this scenario would be to move on and find someone else entirely. Find someone who will understand your humor and conversation topics.

If she doesn’t kiss you, it could be due to you just not being her “right fit”. Chemistry is dependent upon two people clicking. That’s basically the whole gist of it. But if the energy clashes, or doesn’t fit, then everything else is going to feel off. This is just one more thing that you absolutely cannot force. You can’t make someone mesh well with you. Either you click or you don’t. There’s also a heart-breaking flip side: you click and she doesn’t. Meaning that this girl could be everything you ever wanted, but she still won’t give you the time of day. (500) Days of Summer, anyone?

There could be a dozen reasons why a girl doesn’t kiss you, but there are dozens of reasons why a girl would.  If a girl doesn’t kiss you, don’t let that discourage you. The dating game is a tricky place to be. The most important thing is to stay motivated and move around. Sometimes all you need is a change of scenery and a different dating scene. One day you will find someone with whom you’ll have a first kiss and suddenly you’ll just know that you don’t want to kiss anyone else ever again.