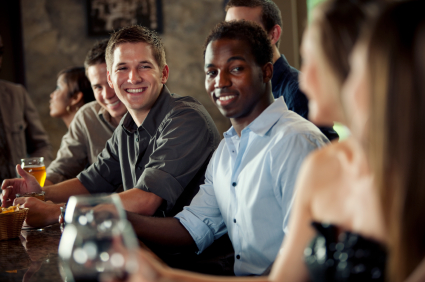 So, how do you talk to a woman? This can be a difficult topic to broach. It’s not often that a girl will want to be interrupted from her leisurely scroll through her Facebook feed or conversation with her friends at the bar, only to be addressed by a perfect stranger who knows nothing about her. There’s always the option of introducing yourself then asking what she’s into, but try to go a little further than that.

Relax and enjoy the scene

If you’re in a club and your attention is drawn to someone, odds are that she sees you as well. But before the convo even starts, you want to appear confident. You should exude good vibes. So instead of immediately scoping out the place so you can go talk to a woman, relax and chat with the friends you came with. Create a fun and casual scene. Don’t ignore everyone and sip on your beer while glued to your phone. Nobody is going to want to talk to that guy. Appear interested, and you will seem interesting in return. Your body language will say “I’m present and relaxed. I’m and enjoying the moments I have here.”

After you’ve spent some time getting into the feel of the place and catching up with your friends, start looking around. You don’t want to spend five minutes sending sneaky glances at the gorgeous woman across the room. News flash: You’re really not being that subtle. And a girl who sees the same guy checking her out- but not working up the nerve to speak to her- is not having a good first impression. If anything, you’ll seem creepy and she’ll be less likely to respond well once you sidle up to her. As soon as you see the woman you want to talk to, go to her! Don’t sit around weighing your options. Keep to the three second rule. Within three seconds of spotting a woman you want to rub elbows with, then go for it. When you go up and talk to a woman, it will show that you’re assertive. This is a great quality to have.

Before you even open your mouth and talk to a woman, make sure you retain a positive mindset. Be careful not to be harsh or judgemental towards her. Start off by complimenting her. But don’t say anything like “I just had to come over here because you’re so beautiful,” because that can be an immediate turn off! Women don’t want to only be recognized for our physical beauty. We get enough of that on the daily. Whether it’s from dudes sneaking into our DMs or guys catcalling on the streets when we’re just trying to go grab some Starbucks. Those guys aren’t the kind of men who will end up getting a response. If you want to really impress a woman, praise the effort she’s put into her appearance. Instead of remarking on her amazing curves, compliment her style. Rather than saying that her eyes drew you in, tell her that her necklace/bracelet/earrings suit her well. When you talk to a woman, you can already begin learning about her by how she carries herself and chooses her style. Another way to go would be remarking on the scene. And no, do not talk about the weather. That’s a pretty dead topic. Instead, ask her if she knows the name of the song playing, or share a comment on how crowded the place is. I once had a man come up to me and tell me a story about one of the people down below us in the club. After he had shared, he told me it was my turn. Apparently, he had made up the tale on the spot and decided to share his creativity with me. It was definitely an interesting conversation starter. The focus wasn’t necessarily on me- my looks or interests- but rather what I could imagine and read about other people. Don’t be afraid to be creative with your approach. The worst she could do is not talk to you. And then you just return to your friends and carry on. But you’ll never know until you try.

So she seemed into you and said hi back. Now what? The most important thing to remember is to avoid closed-ended questions.

Fascinating. You are dead in the water, my friend. You want to create open-ended questions. Questions that can’t be answered with just a one word response. When you talk to a woman, you want to gauge her feelings, interests, personality (or at least you should). Take some time to think of some things you could ask her about. Try to distance yourself from “all the other guys” by taking a different approach to her. Don’t ask her what she does or where she’s from. Ask her about her taste in music or films. Find out how nerdy, intelligent, artistic, or funny she is. Some ladies really dig sarcastic banter. So if she mentions how she isn’t exactly a fan of Taylor Swift’s music, you could throw in a sarcastic “Really? But she’s so great.” And then even go a little further and poke a little fun at T-Swift’s career. She won’t mind. If you really want to go the way of a cheesy pick up line, I’m not against it, but you have to own the cheesiness. Wiggle your eyebrows comically to accompany the line of “Is that a mirror in your pocket? Because I can see myself in your pants.” Whatever you say or do, don’t crowd her. Do your best not to come across as a threatening figure. You could touch her arm lightly, but don’t drape your arm over her shoulder. You aren’t buddies. Small, light touches can be perceived as friendly. Overly touching her or being too close can make a woman uneasy. Instead of asking what drink she’s having, ask her why she’s having what she’s having. Why does she prefer whiskey over vodka? Liquor over beer?

No matter how you choose to approach her, do it with a good attitude. Keep it light, positive, and genuine. Don’t try to impress her with a fake job or neighborhood. She’ll see right through it and no longer want to give you the time of day. Treat her how you view her. When you talk to a woman, give her your full and genuine attention. Learn what you can about her and find out what it is that makes her so interesting (beyond her drop dead gorgeous looks).

If you need more ideas on open-ended questions, feel free to hit up your dating coach. I won’t leave you hanging!

*If you enjoyed this post then don’t forget to sign up for my exclusive emails where you will have access to VIP techniques and tactic to approach women. You won’t find this information anywhere else! Get inside a woman’s head and join now.